Did you know KCRB co-owner and teacher, Matt Crandall, is in the 312th Army Band? He has a big solo performance coming up with them on electric guitar—here’s an update from him on the experience of preparing for it (we teachers practice and learn, too!):

In three months, I am performing the song Wizards in Winter on electric guitar with a full concert-band accompaniment in front of 300-600 people.  If you’re not familiar with the song, think heavy metal (or hair-band, if you prefer) Christmas music complete with drum set, flashing lights and fog machines.  If this description sounds like the Trans-Siberian Orchestra, that is because it is one of their songs.  The forward-thinking Commander of my army band wants to keep our ensemble playing music that people want to hear–enter Wizards in Winter.

Most of the song isn’t too hard–chunky repeated or descending chords played with drums, band, and keyboards.  BUT there is an 8 notes lick (pattern) that comes back several times in the piece that has me wishing I was a lowly saxophone player.  Eight notes that are part of a single scale and exist right next to each other on the staff shouldn’t be that big of deal, but the speed in which they happen is staggering.

So, the next 3 months of my life are going to be “full” practicing 8 notes.  How exciting! I am going to use every strategy I know to successfully perform this piece.  Timeless strategies such as:

4) turning these notes into muscle memory so that I can play correctly without thinking about what my hands are literally doing.

I’ll let you know how it goes!

Student of the Month – Emmalai Pennington 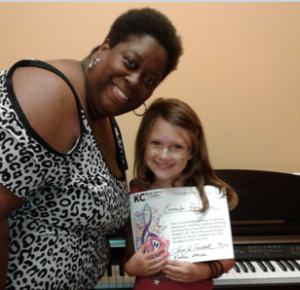 Congrats to Emmalai for being chosen as student of the month! Emmalai has taken piano from Karren Schiele for four months.

Why did you choose to learn piano?

My mom and dad got a piano!

What grade are you in?

What is your favorite song you’ve learned so far with

What song would you like to learn one day?

Angels We Have Heard on High

What do you like to do besides play piano?