A few years ago, we began choosing a Student of the Year for the month of December–a student who had been with us a long time, has great character, has shown commitment to their musical studies, and is a graduating senior. We are pleased to announce Zade McKivergan as our KCRB 2021 Student of the Year! 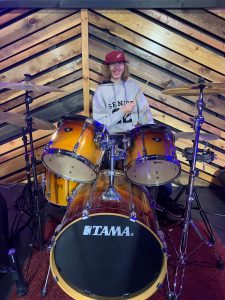 Zade is a rare individual with great character and is always ready and open to learn.  Zade has been a KCRB drum student since 2015 –over 6 years!  He has been in our Rock Band classes for 5 ½ years as well. His teacher is Laura Lee Crandall.  Zade is soon to graduate from Raytown South High School and would like to work in film or video editing one day. Here’s a little more from Zade:

Why did you choose to play drums? I remember being at a park and there was a concert going on.  I was able to get up close and see the drummer.  He was just rocking it, and it inspired me. So I signed up to play drums!

What is your favorite drumming memory so far?  One pretty awesome memory was performing at Californo’s with my KCRB band at a Student Battle of Bands.

Are you in other music groups outside KCRB?  Yes, Marching and Symphonic band at Raytown South, and some other students and I made a band for an open house at Summit Tech. 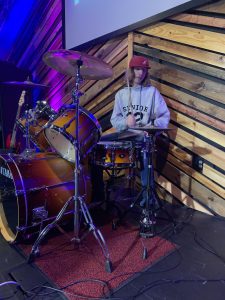 Any advice for other musicians?  Keep moving forward towards what you’re passionate about.  If you mess up, you’re normal!  Don’t let it get to you.  Messing up makes you human.  But keep pushing on past your mistakes—that’s what makes you superhuman! 

Congratulations, Zade!  We’re so proud of you and all you’ve accomplished.

Student of the Year – Zade McKivergan